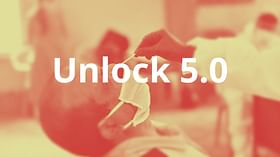 The current phase of COVID-19 lockdown relaxations is set to end on September 30 and Unlock 5.0 will begin from October 1.

In the Unlock 4.0 which began on September 1, the central government gave several relaxations like the resumption of metro services for the first time since late March, and partial reopening of schools for classes 9-12.

Although the Centre has not announced any guideline for Unlock 5.0 yet, it is expected that many new relaxations will be given in the next phase of unlock.

What fresh relaxations can one expect in October?

In the 4th phase of unlock, several schools and colleges partially reopened from September 21 for students from class 9-12. This was permitted on a voluntary basis. In this phase also, primary classes are not likely to resume.

However, as universities and colleges have already started conducting their admission tests, the new academic year may begin virtually via online classes.

Also Read: Watch: Journalist breaks down on video; alleges he was thrashed by Times Now cameraman

Open-air theatres were permitted to open with effect from September 21.

In the Unlock 4 guidelines, other public places like malls, salons, restaurants, gyms were allowed to operate with restrictions. However, cinema halls, swimming pools, entertainment parks were not permitted to operate.

Now it remains the question whether the government will allow the cinema halls to reopen from October or not. In Unlock 4, only open-air theatres were allowed to kickstart operations from September 21.

Recently, few reports claimed that the Ministry of Home Affairs has allowed the reopening of theatres from October 1 with strict regulations in place. However, the claim was debunked by the Press Information Bureau.

“Claim: A Media report has claimed that Home Ministry has ordered reopening of cinema halls across the country from 1st October with the imposition of strict regulations. #PIBFactCheck: This claim is #Fake. No decision has been taken by @HMOIndia (sic),” read the tweet by PIB.

Also Read: Will restaurants open in October? Here is what we can expect from Maha govt’s Unlock 5.0 guidelines

In phase 4 we saw Taj Mahal and several other monuments opened for tourists. Now in the 5th phase, more tourist destinations are likely to open. Tourism and hospitality were among the most affected sectors in the COVID-19 lockdown.

Social, academic, sports, entertainment, cultural, religious, political functions and other congregations were permitted with a ceiling of 100 persons, with effect from 21st September 2020.

These activities are also likely to get more relaxations.

When the COVID-19 cases started to surge in the country, the Indian government decided to lock its population inside their houses to arrest the spread of the virus.

In March, PM Modi came up with a nationwide lockdown on March 24. The lockdown was later extended. However, after that government started to ease the restrictions and came up with Unlock guidelines on 4 occasions. Now the Union Home Ministry is slated to come out with fresh guidelines for October.

(With inputs from agencies)

Also Read: Will schools open in October? Here is what we may expect from Centre’s Unlock 5.0 guidelines